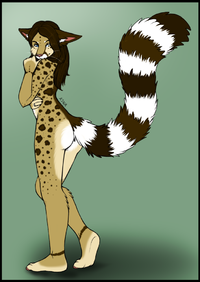 Ajna's fursona, named "Tee" as drawn by herself. 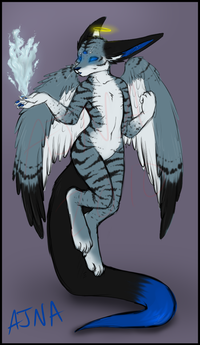 Terrah has several characters, all of which are an extension of her in one way or another. However, Tee is her official fursona, and represents her in art form. Tee's species is esperian.[1] Tee has telepathy.[1] Before being a esperian, Tee was a ringtail (aka cacomistle), and later a genet.[2]

Despite sharing a name with one of her characters, Terrah stresses that her character Ajna is not her fursona. Terrah took on the alias "Ajna" after abandoning her older name.

Ajna has created a fiction species called esperian. They are (feline-based organic androids) with a long muzzle and mind-powers such as telekinesis.[1]

Ajna has created a fictional species called elfanes. They are a smaller-than-average, magic-wielding creature with an androgynous appearance. They have been a four-year ongoing project and are still under construction. Ajna has many other species she is working on, including serosa, imitirian, minsareon, as well as others, but none are quite as developed as the elfane.