Aimore is an artist who draws anthropomorphic animals. Aimore is from Brazil. Born Sept., 1962, he is a furry since 1968. 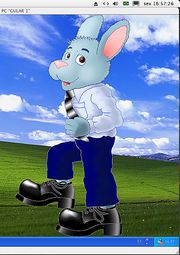 His real name is Dionisio Codama, born in Sao Paulo City.
Started drawing anthropomorphic animals in 1968. His first character was a white mouse called Ratinho (Little Mouse), the new name adopted is Alcalino.
At the beginning, he drew comics "sucking stories from publications".

In 1975 he stopped doing this kind of “art”, destroying all the material and the anthropomorphic characters he created, except the white mouse.


In 1981, rose again the desire to make anthropomorphic animal art creating a grey and white rabbit, with no name, resembling the Bugs Bunny cartoon —He loves only western style cartoons—.

In 1982, the rabbit was named Aimoré, which means “biter” in Tupi-Guarani language, it was a nickname for the Botocudos —a fierce and alleged cannibal indian tribe, they were ruthlessly exterminated—; also name for a species of ant; name for species of fishes; name of a biscuit manufacturer. A name 100% native.

In this same year, Aimoré became all grey-lead; Dionysius resolved that his traces would not be copied from anyone, the backgrounds were scenes of reality, the characters never would have “elastic effects” (the body like a rubber band), and avoiding any influence (in other words, without copying).
Too pretentious, but it’s worth designing somewhat different.

His drawing was an hobby, made with simple materials: Any piece of paper from scratch, common A4 paper, plastic rubber, pencils, ballpoint pen and colored pencils. No wet paint.

Dionysius appreciates details in the drawings he does, the characters should be detailed, from head to toe. Yes! They wear clothes and shoes. Many people don’t agree seeing anthropomorphic animals wearing clothes and shoes, they think it’s a “sacrilege”.
Dionysius laughs and he tells: Never take the novel “Animal Farm” too much seriously.

Despite being a furry since 1968 he contacted the fandom in 2001, looking for images of bears in Altavista. He found a furry place called yerf, looking deeply he located the VCL portal where he affiliated.