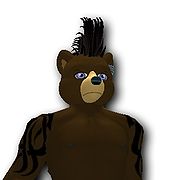 Aikho (Aikho Ursidae), is a fur from Norway. Born in the late summer of 1989, found the fandom in 2004 and chose the Grizzly Bear as his fursona.

In 2003, he found an article in a magazine about FL Studio, and after trying it, started learning how to make his own music. Many old projects are floating around on sites like Fur Affinity, more recent productions can however be found on most streaming services under the artist pseudonym "Aikho".

He has also made a few DJ mixes which reside somewhere on the internet as well as having a couple of live DJ performances in places like a public swimming hall and a smaller convention as well as a couple of small online radio stations in the USA.

Aikho has always loved listening to music and once he got to explore music outside of what his immediate sphere presented him with he fell in love with the more extreme styles metal, like Black Metal and Crust Punk as well as darker and more extreme genres of Electronic music like Early Dubstep, Early Hardstyle and the many flavours of Hardcore. The influences of this can be heard in his music to varying degrees throughout the years.