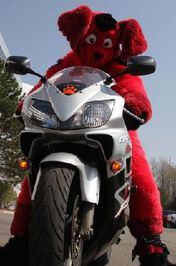 Perro is a furry artist, fursuit maker, and convention organizer, who lives in Illinois, USA. He first became interested in anthropomorphic animals at age fifteen, from watching cartoon characters and werewolves in the media. When he began to explore the Internet, he discovered the already-established online furry community, and began conversing with other furs worldwide.

After taking a two-year break from the fandom, Perro returned in 2002, at which point he began to attend furry conventions and organize local meets. In 2004, he moved from North Carolina to Chicago.

Perro enjoys a variety of activities within the Chicagoland area, and has historically attended attends some of the events sponsored by LAFF, as well as these conventions:

Perro's fursona is a canine (a "typical doggy mutt"). He has dark brown fur with tan highlights, and yellow-brown eyes. Perro has built a multiple fursuit versions of this character, and owns five other personal costumes.