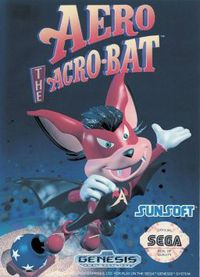 Aero the Acro-Bat is a Super Nintendo and Mega Drive/Genesis game created by David Siller, developed by the now defunct Iguana Entertainment,[1] and published by Sunsoft in October [1993.

Inspired in part by the "mascots with attitude" trend that was common following the introduction of Sonic the Hedgehog,[1] the game featured a red bat named Aero, who works and lives in a circus. He must defend the circus from an evil ex-clown called Edgar Ektor, who used to work in the same circus and wants it shut down forever. Aero must also deal with the sidekick Zero the Kamikaze Squirrel.[2]

The levels are played in 2D platforming, but in order to clear levels, the player must accomplish certain tasks so that the exit warp can be revealed. Those tasks include passing through hoops, step on platforms until they disappear, ride roller coasters, etc. There are 4 worlds with 5 levels in each one, and the levels are large, many of them containing awkwardly positioned spikes that kill instantly.[1] Aero can attack enemies by shooting limited stars or by doing an aerial diagonal drill attack at his target (when he is in the air).[1]

Aero the Acro-Bat was awarded Best New Character of 1993 by Electronic Gaming Monthly.[3]

In 2002, Metro 3D decided to port this game for the Game Boy Advance, with a battery back-up (which the original versions lacked).[1]