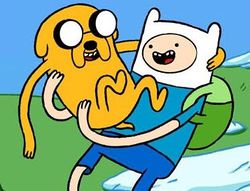 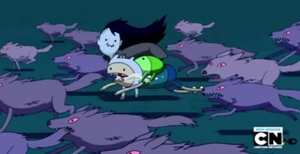 Adventure Time is a American cartoon series produced by Cartoon Network since 2010. The animation contains a large number of anthropomorphic characters, mainly talking animals, as is the case of the protagonist Jake the Dog. Other parts of the furry interest are the fact that the protagonist Finn wearing a hat with bear ears, as well as inclusion of fictitious and cross animal species such as the Rainicorn. Became very popular in the early 2010s alongside the other cartoons as My Little Pony: Friendship Is Magic and Regular Show.

The show takes place on an island called The Land of OOO in a alternate universe, where the planet Earth has been changed by a global war that ended in a huge explosion 1000 years prior. During this time many talking animals, magical creatures and animated objects appeared in different realms. The protagonist is a human boy named Finn who wears a hat with ears and was adopted by a couple of anthropomorphic dogs when he was a baby. During most of history Finn is considered the only human in existing OOO, living to fight monsters and bestial creatures (mostly with aspects of animals) beside his foster brother Jake, a anthro dog with the elastic powers. 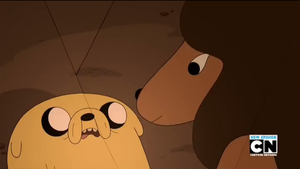