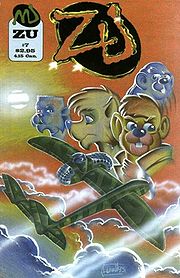 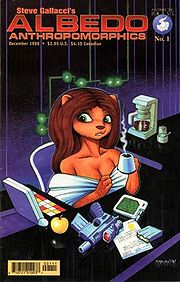 Adrian Kleinbergen (born 1961) is a Canadian artist, born in Edmonton, Alberta. Along with drawing and paint­ing, he does jewelry design and manufacture, sculpture, caricature, writ­ing, costuming, and even magic. He started in comics in 1987, penciling, inking and coloring Starstone and Darkewood for Aircel Publishing in Ottawa, Canada. He ran his own comic publish­ing com­pany, Ground Zero Graphics, which published The Shadowalker Chronicles in 1991. Adrian is the primary artist and a column­ist for the national magic maga­zine The Servante. He was one of the original artists for On Spec and Neo-opsis magazines, doing both covers and interior art. Adrian's latest project is a graphic novel, Frontiers, written and drawn by him and published by MU Press. He has worked on a number of MU Press and Antarctic Press projects, inking various penciller's works (Chuck Melville, Oscar Marcus and Steve Gallacci), pin-ups, and full art jobs for books such as Cyberkitties, Albedo, and Mousearella.

Adrian has also worked as a professional comics inker for a variety of magazines and artists and has displayed and sold artwork in a number of venues and galleries.