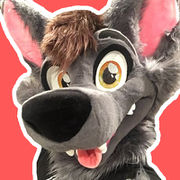 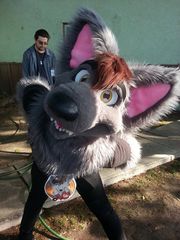 Ace of Hearts Fox, is a musician and YouTuber who lives in Orange County, California, USA.[1] His channel is most known for motivational advice videos, and live streaming music.

From 2014-2017, he ran a YouTube channel called Da Bawks. It mostly featured sketch comedy videos, many of which parodied video games. In its active period, the channel achieved over 14K subscribers, and reached upwards of 400K views on its most successful video, Five Nights At Furry's (a parody of the popular Five Nights At Freddy's franchise).

Ace currently runs his own personal YouTube channel named after his fursona. It primarily features videos of him in fursuit giving advice, and talking in personal vlogs, along with the occasional sketch comedy and convention video.

Ace played guitar and sang vocals in a band called The Barebones until 2017.[1]

As of 2019, he is working on a new music project called "Nervous Vulpis", where he writes and performs original songs.

Ace runs a fursuiting blog on tumblr, which mostly features videos and animated GIFs of him in fursuit. He also answers mail, often giving advice and guidance to other furries.