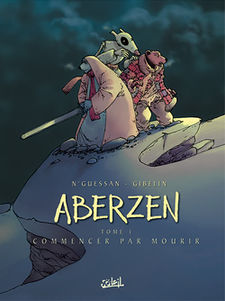 Aberzen is a series of French fantasy adventure comic books by Marc N'Guessan and Christophe Gibelin. Its original release in 2001 was by the publisher Soleil Productions. In 2003, the publishing company ibooks started publishing English translations.

The English translation of the first issue, titled Quest of Aberzen, Book One: To the Death, was published in 2003 by ibooks.

Some miners, members of a brown, bear like race, are in a mine when they are attacked by Krékersès (an insectoid race). During the attack, mine director Hotis is mortally wounded and then thrown into a person-sized egglike 'stone'. The 'stone' transports him to a Krékersès planet where he start an (undead?) existence with a huge hole in his chest.

Waiting for him on the Krékersès planet are a groups of beings from other worlds who were also transported from their home planets by other 'stones'. Hotis is told the stones are instruments for the Krékersès to invade various planets. Hotis is talked into joining a quest to stop the Krékersès invasions.