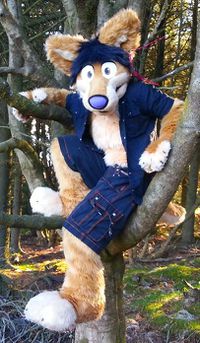 Abby-Fennec (born September 18, 1991)[1] is an anthro artist and fursuiter from Kópavogur, Iceland.

Abby's fursona is a hybrid of dingo and fennec fox. Abby used to be a Gatomon back in 2002-2003 before he changed species to a dingo. Seel said that Abby looked too much like Seel, so Abby changed his fursona little by little, and now it is a fennec with dingo fur colors.

Abby has been a member of the fandom since 2001. He started as kornismylife on deviantART in 2005, then became Abby-girl. In 2007, he let deviantART's administration department close that account due to a stalker Abby knew in real life. After that, he changed his account to Teh-dingo. As many people were then drawing Abby with small ears, he changed his username again to Teh-fennec.

Abby got his first fursuit made by Victoria10717 in 2012, with a head base from Isabella Price. However, the head base was too big, so he bought another head from Victoria10717 later that year, and he received it in January 2013. Abby went to his first convention, NordicFuzzCon, in 2013. He met one of his old idols, Duke the dancing dog.

Abby runs an event in Iceland called IceFurCabin with his boyfriend Boe. They usually rent a cabin during the summer and go sightseeing around the country. The cabin event started in 2013 and has been growing ever since. At first, the cabin was a part of IcelandFurs, but after Abby left that group then, it was separated from IcelandFurs.