Abando was the first furry convention to be held annually in Brazil. It was founded in 2008, and occurred during the Brazilian Carnival. The last edition was in 2016, with 87 campers.

The event was first idealized in 2007 during a discussion in a Brazilian bulletin board Furry Brasil. A topic calling for more furmeets in Brazil got popular and inspired WToboe, Reyres and Ekevoo to put together an actual event. A camping convention was finally agreed between them, and a year later, Reyres assembled the first team composed by Toboe, Ekevoo and himself, plus three additional volunteers.

The event piloted on February 2nd, 2008 and ran for 4 days. Albeit open to the public, spots were limited to 15 guests through a registration form. Payment included lodging, meals and materials for workshops and activities.

Toboe hosted the event in his private estate, in São Roque, SP, about 50km from São Paulo, SP from 2008 to 2011. At capacity, Abando moved to Intervales State Park in 2012, where it could increase its attendee capacity, and provide better lodging and infrastructure for its guests. It was also in 2012 that Abando used a third party company to run the kitchen, freeing the staff to focus on camp activities. In 2015, Abando ran into issues at Intervales given the popularity the event gained. At capacity again, and the fact that Intervales is not gated, allowing guests and non-furries to unrestrictedly enter the park, the logistic problems and conflicts were too great for the number of staffs available.

After an exhaustive 2015 for staff members and guests alike, Abando announced it was going to leave the public park[1], the main concern was attendees safety, but other factors like event ghosting, high prices for meals, staff burnout and the combination of bad weather and poor maintained access roads were also great motivators for the move.

Abando stated[2] that their the new site for 2016 was set to be a proper private school camp, and it could held the triple of attendees. With proper restricted access and good access roads, Abando 2016 ran better, setting the highest attendance numbers ever. However, the numbers fell short to cover the financial cost to run the event, and before the event date, it was made public that the Abando 2016 would be the last.

The event wrap up on February 9th, 2016 with a closing ceremony held by Reyres. In 9 years of history, many other events and furmeets appeared, filling the void that Abando would leave, but ultimately accomplishing its goal back in 2007: to solve the lack of events in Brazil.

The Guests of Honour of Abando have been:[3]

With the growth of Abando in 2012, the convention moved to Intervales State Park, a nature reserve. The location is still in the same state in São Paulo, but is 260 kilometers from the capital city. Intevales State Park has natural cascades, caves and critters. For 2016, Abando moved to Monjolinho School Camp in São Pedro. Monjolinho has housing, a restaurant, a pool, a sports field and a meeting room.

Introduced as official mascot in 2015, Oby (Green in Tupi-Guarani) is an Teiú or Tegu, a species of lizard, native to Central and South America. 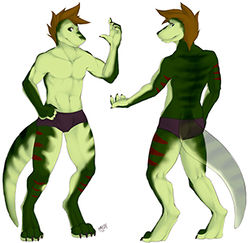 Abando has one chairman and eight organizers: