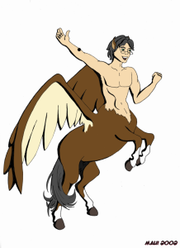 Aatheus, or Jeff, is a fur located in sunny San José, California, U.S.A. An Undergraduate student at San José State University, Aatheus has been involved in furry fandom to varying degrees since 2001. His furry persona is a winged centaur, or alicentaur.

Aatheus regularly attends Further Confusion and (beginning in 2005) Anthrocon. Funds and time constraints have limited him to primarily California cons, but this may change in the future. He has volunteered at conventions.

Aatheus has co-led a Furry Ham Radio panel at Further Confusion since 2004 or 2005, introducing new folks to Amateur Radio and providing a forum for furry hams.