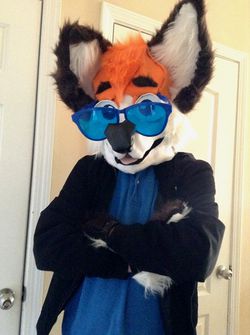 Aaron Foxx in his signature jacket and blue sunglasses.

Aaron fursona, Aaron Foxx, is a fox with orange [[fur], a white muzzle, and brown ears. His paws are half-brown, half-white. He typically wears a collared shirt, but sometimes is seen wearing a jacket and blue sunglasses. He is calm, soft-spoken, and somewhat shy at times. His fursuit is a homemade partial.

Aaron has been a YouTuber since March 4, 2018, and has 529 subscribers (as of May 8, 2020). His videos consist mostly of vlogs and funny skits revolving around the usage of puppetry and costumed characters.

He was featured in one of Majira Strawberry's livestreams and even collaborated with him one time. Aaron also collaborated with Sherbert Shenanigans and Timus the Fox as well. Aside from his own channel, he once collaborated with making some gaming videos on FurryGamingCorner, a small collaboration channel of furry gamers which lasted for a short time in 2018. Aaron was a part of the group but quit shortly after in August 2018 to focus on his own content.

The main characters of Aaron Carothers' videos include: