A Story of the Stone Age 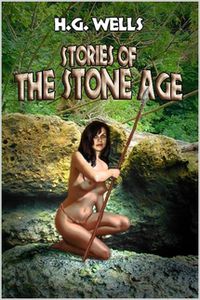 A Story of the Stone Age is a short story written between May and September 1897 by H.G. Wells, author of The War of the Worlds.

The story is unusual for H.G. Wells by the number of animal characters present within the story, as well as the degree of anthropomorphism within the story that provides some appeal to furries.

The story takes place in 50,000 BC during the Palaeolithic era, somewhere in England. The story follows Ugh-lomi, a primitive man who is hunted from the tribe, accompanied by a woman named Eudena. In hiding, Ugh-lomi fashions the first axe, and after several adventures through a countryside roaming with wild animals and other dangers, is able to take his place as leader of the tribe.

Other tribal members include One-Eye, Bo, Cat's-Skin, Snake, The Snail-Eater, Haha, and Si.

Other animals mentioned throughout the story include hyenas, boars, rabbits, red deer, foxes, elephants and vultures.