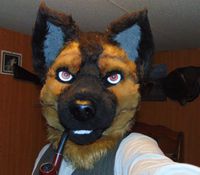 AJ's fursona is a German Shepherd,[1] and his fursuit was made by Interrobang.[1]

AJ joined the furry fandom after seeing a documentary[clarify] that had furries in it, one of whom was Calamity Cougar. Seeing how how much fun the furries were having, AJ thought he might like it as well, so, in 2010, he made his fursona AJ, a German Shepherd cowboy. He has been quoted as saying, "He was almost made a fox then a black bear, but I went with a shepherd cause I feel that I'm more close to them".[citation needed]

The first convention AJ attended was Fangcon 2012, which was being held in Nashville, Tennessee. AJ was very happy to find out that Draconis/Calamity Cougar would later become part of the convention , and he got to meet his furry role model for the first time.

AJ likes to make YouTube videos of himself, just goofing off and having fun. He is also an 18th century reenactor.[1]