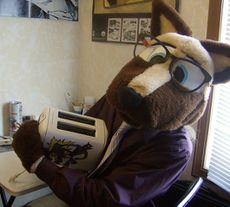 Battery in fursuit holding his toaster

AA Battery, or just Battery (born 1993) is a furry artist and fursuiter from Fort Wayne, Indiana, USA, and is currently studying Graphic Design. He considers himself a cartoonist and is the creator/artist/writer of the web comic, Journeys. His name originated when he was in middle school and a friend noticed that his first and last name started with the letter "A".

Though Battery calls his fursona a German Shepherd with the pattern of a fox, stating "that he's a German Shepherd who happens to look like a fox." Battery designed his fursona to be just like him IRL, "We are the same, same height, weight, clothing and personality. The only difference is he has a 'functional' time machine toaster." Battery's fursona wears a yellow shirt with a black lightning bolt on it. Both Battery and his fursona's current hair style are a pinkish purple mohawk.