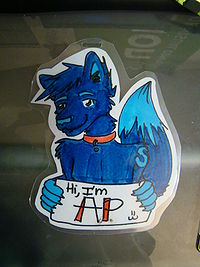 A.p. has been in the anthropomorphic fandom since the age of seven, but never interacted with any furry communities or events until 2009, when he attended Further Confusion and created a Fur Affinity account where he posts his pictures.

He (currently) stands at 5 feet 7 inches tall and has his hair spiked forward.

"A.p." was originally a gaming nickname given to him by a friend. It later became his fursona nickname, and he responds to "A.p" if anyone calls it out in public.

Another amateur photographer, but usually does things other photographers don't. For example, Further Confusion 2010, he was the only one able to get a photo similar as Dragonscale's official Fursuit parade photo.

He does not have a job. But he does build computers, and repair automobiles. He is currently working as staff at Further Confusion 2010.

He hopes to own or work in a tuner shop or a car shop to modify or repair cars. Also dreams of one day racing for the Audi Sport Le Mans Team.

Entering the Fandom at a young age, he vowed to help any responsible teenage furry with help when it comes to talking to parents about the fandom.

His success rate in talking to parents (directly or telling the teen what to say) of teen-furs is 94% with only one failed attempt at a parent that wouldn't listen to any new ideas.

He is also one of the many few teenage furries that is staff For Further Confusion 2010 to 2011.

As Further Confusion 2011 will be his last and final Furcon before he becomes 18 and is no longer called a Minor, he hopes that he will meet someone to carry on his Teen Fur Representative rank and help Teens that deserve the aid.