In the mid 1980s, a unified group of fans interested in animal characters in comics and stories was forming around other organized fan activities. Such as Room parties at science fiction conventions, meetings of the C/FO, and APA collating parties (for funny animal and cartooning APAs, such as Vootie and Rowrbrazzle). Fans with internet access kept in contact with each other on computer BBSs (Bulletin Board Systems) like the Tiger's Den, StormGate Aerie and Kyim's Scratching Post

As the internet became more accessible, it became the most popular means for furry fans to keep in touch and share their artistic efforts. This gained the fandom higher visibility and it began to grow rapidly.

Virtual environments, such as MUCKs, soon became the most popular places on the net for furry fans to meet and communicate.

APAs and fanzine "wars" became popular, with mail-in art and comic contributions collated and distributed to all members.

The early 1980's also saw the release of several all ages films that greatly increased interest in Furry Fandom, including The Secret of NIMH, The Flight Of Dragons, The Last Unicorn, Animalympics, and as well as mature films like The Plague Dogs. While the fantasy novel market soon began producing such titles as Alan Dean Foster’s Spellsinger series, Brian Jacques’ Redwall and Tad Williams’ Tailchaser's Song. And the independent comics market produced titles as varied as Teenage Mutant Ninja Turtles, Albedo, Usagi Yojimbo, Cutey Bunny, Critters and Omaha The Cat Dancer. 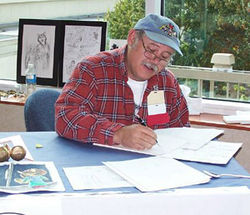 In 1980, then-US Air Force graphics specialist Steve Gallacci entered a painting of his original "funny animal" character, Erma Felna, to the art show at NorEasCon II World Science Fiction Convention in Boston during Labor Day weekend. The resulting group of fans who gathered around his artwork exhibit and his notes, which explained Felna as being a participant in a high-tech intergalactic war, as well as being bio-engineered toward that purpose, displayed their own interests in the growing body of media which depicted funny animals in increasingly dramatic or mature roles and settings. The so-called "Gallacci groups" began meeting at various WorldCons and Westercons from 1980 to 1985.

A New York chapter of the C/FO was also founded this year by Joseph Ragus, Sr. and Jerry Beck. The east coast club's mascot was a furry character, Anima. Created by Ken Sample, a founding member, Anima was some sort of a "Fairy Skiltaire" with long antennae and butterfly wings.

The Tiger's Den BBS was started and put online by Andre Johnson as a general SF-fandom electronic bulletin board.

Disney animator Shawn Keller allegedly made the first fursuit in fandom history this year after losing a bet to computer animator Robert Abel.

In early 1983, The Tiger's Den BBS accepted its first furry storyboard, Ken Sample's "The Puma's Room," and by June it received enough members who happened to be fans of anthropomorphic characters in fiction to be considered the first "furry" BBS.

In September, the current location of The Prancing Skiltaire was bought by Mark Merlino and living space is afforded to five or six roommates, including his eventual husband, Rod O'Riley. Johnson, one of the original residents, brought The Tiger's Den BBS into the estate. Henceforth until its shutdown in 1996 (Johnson had moved out long prior to 1996), the BBS was dedicated squarely to furry storyboards; however, while the Prancing Skiltaire slowly became more of the modern "furry house" of fellow furry roommates (and a template for other furry house establishments), the estate was initially home to fans of both speculative fiction, furry art, anime, etc. 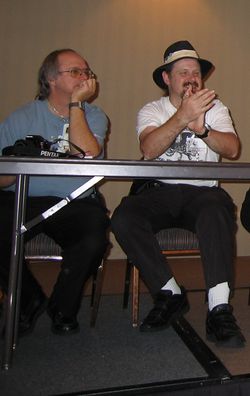 Mark Merlino (L) and Rod O'Riley (R) at a Califur 3 panel. The couple and co-proprietors of the Prancing Skiltaire helped establish the modern concept of the furry convention.

In 1985, at the San Diego Comic Convention, Judy Niver (one of the founders of the C/FO), hosted a party in her room at the Hotel San Diego. The Rowrbrazzle APA group was also having a party in the same hotel, and there was much overlap in attendance. After that party at Comic Con, it became a tradition to have at least one furry party during the convention. In more recent years, the Comic Con party has been called CritterConDiego and Califur Diego.

Also, at the 1985 Westercon Science Fiction Convention in Sacramento, California, Mark Merlino and Rod O'Riley hosted a room party in Sheldon Linker's and Toni Poper's room. Most room parties at sci-fi and fantasy cons have a theme, so the party was called The Prancing Skiltaire party, after the name of Merlino's house. Animalympics was screened, along with some Warner Bros. short cartoons, and collections of furry artwork and short stories were on display. Several visitors to the party were very interested in the videos and the art. Some showed sketchbooks and collections of their furry art.

Mark and Rod's party at the July 1986 Westercon in San Diego, CA, was the first to be openly called a furry party. After the success of these parties, Mark and Rod began hosting similar events at conventions all over California.

The Electric Holt was started by Richard Chandler (sysop), Mitch Marmel (assistant sysop), John DeWeese, and Seth Grenald at Drexel University in Philadelphia in May, becoming the first East-coast discussion board to attract a large furry presence.

In June, Merlino and the furry party crew encouraged the adoption of Baycon by furry partiers. It soon attracts a large presence of furries, but it peters out in two or three years due to hostility by non-furry attendees.

Merlino and Riley co-hosted Conspiracy '87 at the 1987 World Science Fiction Convention in Brighton, England (August 27-September 2). This is the first furry event in Britain, and is credited by early British furry and funny animal fans as both their own personal introductions to American furry indy comic books and fanzines and the source of the British fandom, which began in 1992-1993 in earnest.

In 1989, Mark Merlino and Rod O'Riley decided to expand on the furry party concept and host the first prototype furry convention, ConFurence Zero. Over two days, 65 people out of an intended 90 registrants attend, and over US$1,100 was raised at the art auction.

In August, Nicolai Shapero starts FurNet (through FidoNet) as a network of BBSes with furry discussion areas.

Due to fan apathy, Vootie published its final issue (number thirty-seven) in February 1983, followed in close succession by the disintegration of the club. By October, Marc Schirmeister in Los Angeles put out a request for fans to join a new funny animal APA, one which would welcome both amateur and professional artists.

In October, Other Suns is released by FGU, with development of the game headed by Nicolai Shapero, art by Ken Sample and Fa Shimbo, and species such as Mark Merlino's skiltaires. Furry fans participate in the testing of this game, and 12,000 copies are sold before FGU first dissolves in 1991 (it is later reconstituted and continues to this day). 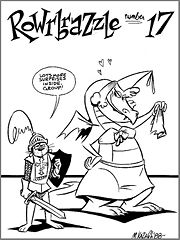 The first issue of the Rowrbrazzle APA was published in February 1984. Unlike Vootie, which primarily focused upon non-costumed-hero funny animal characters from the perspective of professional or seasoned cartoonists, Rowrbrazzle opens itself to reception of works by any artists who may have an interest in using funny animals in any role. The transition between Vootie and Rowrbrazzle is considered by some to be a crucial evolutionary point between funny animal fandom and furry fandom, though it would still be many years before the new term was universally adopted.

Meanwhile, Gallacci progressed to self-publishing his own Albedo Anthropomorphics, with issue 1 being released in June and featuring his Erma Felna: EDF. Issue 2, which came out in November, featured the first story by Stan Sakai in the Usagi Yojimbo series.

In May, Eastman and Laird self-published Teenage Mutant Ninja Turtles to financial and critical success.

In June, Fantagraphics Books launches Critters and The Adventures of Captain Jack.

In May, Kyim Granger's Furversion is initially started as the premier newsletter of the furry party crowd, but soon becomes the fandom's first indy fiction and art magazine.

In May, Martin Wagner starts Hepcats.

In August, FURtherance is started by Runé in Philadelphia.

In November, APA/fanzine Gallery is started by Richard Chandler to cater to both artistic, literary and commercial furry pursuits. Meanwhile, FurNography is started in San Francisco by Robert and Brenda Daverin.