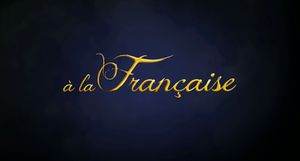 The royal court bows/curtsies to the king.

à la Française is a seven-minute animated short film. Set at the Palace of Versailles during an afternoon in 1700 (during the reign of Louis XIV), the royal court is depicted as a brood of anthropomorphic chickens.

At the Palace of Versailles, a ball is being held. In the Hall of Mirrors, several couples are dancing in precise, formal steps to the music from a small chamber orchestra. One chicken stands to the side at a lectern, observing the proceedings. She writes down notes on what she sees, which includes various indiscretions. Outside, chickens are engaged in a number of activities, including taking tea or playing games like badminton, croquet, or blind man's buff. One rooster walks around drawing his sword at imagined enemies, whilst another trio cause minor havoc by firing off a canon ball.

Back in the hall, the king at last enters, and there almost a scandal as a still-blindfolded blind man's buff player comes close to reaching out and touching him. A breeze through an open window scatters into the air the notes the observer-chicken has been making. They are caught and read by the other courtiers, who are at first amused, then incensed as various infidelities come to light.

The story ends with the ball degenerating into a number of fistfights as the notes, carried aloft by the breeze, fly out of the windows and up into the sky.

à la Française was made in 2012, as a student film at the Supinfocom animation school of Arles, France.[1] Its creators were:[2]