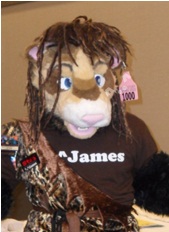 ^..^James (or James; born January 26, 1983) is an amateur fursuiter from Randallstown, Maryland, U.S.A. His fursona is a black-footed ferret.

The ^..^ symbol, depicting a pair of eyes between a pair of pointed ears, means "I'm all ears and eyes!" and often appears in a logo on his badges and fursuit shirt.

On June 27, 2010, ^..^James acquired the last Dorsai Irregulars' fursuit cattle tag at the Anthrocon charity auction benefiting the Fayette Friends of Animals shelter in Uniontown, Pennsylvania.[2] The tag was purchased for $1,600, making it the most expensive auction item sold at an Anthrocon chartity auction.[3]