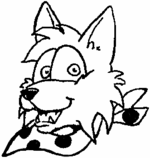 Zonie was a furry comic strip by the late Michael-Scot McMurry, centering around the adventures of the title character, a yellow-furred anthro coyote in a black vest and polka-dot bandana.

Zonie was usually brewing a batch of killer chili in a recycled trash can over an open fire somewhere deep in the deserts of Southern Arizona, taking occasional harassment from the strip's other continuing character, a fox apparently named "The Fox" (although in a strip published in the Rowrbrazzle APA, he was named "Slick").

Occasionally Zonie would act out a serious crush on Florence Ambrose, an anthro red-wolf bitch from Mark Stanley's online comic Freefall, inviting her over for chili "at his place" out in the desert. This usually resulted in a major culture clash between the two.

Zonie (the comic) ran as an occasional single-page strip in Zu by Mu Press and the fanzine Huzzah!

Zonie (the coyote) was the main topic of In The Zone, a charity comic book created by a group of furry artists in an attempt to help defray Michael's medical costs. He also served as mascot to ZonieCon, a short-lived Arizona-area furry mini-con. In return, Zonie is himself named for a contraction of "Arizonan", i.e. "from Arizona".