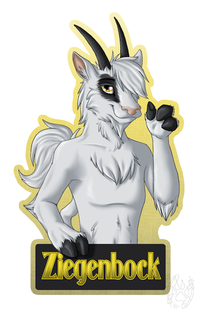 Ziegenbock, as drawn by Willow141 (FA)

Ziegenbock Yagi-Eisenhuf (born January 24), often shortened to Ziegenbock, is a furry writer from the United Kingdom. Whilst born and bred in Suffolk, as of July 2014, he lives in West Midlands. [1] His fursona is a mountain goat.[1]

'Ziegenbock' roughly means 'billy goat' in German, reflecting his fondness for goats and for anything related to Germany. 'Yagi' means 'goat' in Japanese, and was added to acknowledge the influence of Japanese pop culture on the fandom. 'Eisenhuf' literally means 'iron hoof' in German, reflecting the surefootedness and resilience of the mountain goat. However it is also a play on the German word 'Hufeisen' (horseshoe), referencing his family's horse racing background.

Ziegenbock was first introduced to the fandom in early 2009 by a long-standing friend. Shortly afterwards, he moved to Durham in north-east England, where he made contact with local furs. He attended his first furmeet in February 2010 in Newcastle upon Tyne. He moved to Wales in September 2012, and then to the West Midlands in March 2014 for work. He attends the local furmeets in Birmingham, where he volunteered on the fursuit walk for several months before joining the organising team in July 2014. He regularly travels across the country to meet with furs, and he attends meets in several other cities including London and Leeds.

Aside from being a writer, Ziegenbock describes himself as a fencer, musician and linguist.[2] He also enjoys singing and travelling abroad. He speaks English and German with fluency.[1]

Ziegenbock has attended Eurofurence 2011 and 2012, and ConFuzzled 2013 and 2014[1]. He works on the Security team for both conventions, and is one of the organizers of Wild North.