A reference sheet for Zementh as done by Morgoth883.

Zementh Lykin Mali (born November 14th, 1988) is a furry artist who lives in the UK. 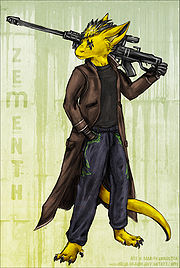 Zementh is a yellow and black anthropomorphic dragon, he has yellow hair that changes to black the longer it gets and also has complete Heterochromia making his left eye red and his right eye yellow.

He has several black areas and markings on his body including the tribal-style markings over his eyes, his belly, the underside of his tail, his claws, the underneath of his legs and including his groin.

He sports wings which morph effortlessly into his body as he prefers to wear clothes over his torso, of which the membrane between is also black.

He has been described as "like a banana - Yellow, Black and slightly bent and squishy".[1]