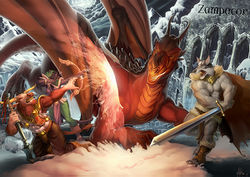 Zampacon '15: Fur Ro Dah!, the fourth Zampacon convention, took place over September 2-6, 2015. It was held in the same location as the previous edition: the three-star hotel Morri Oceania in Bellaria-Igea Marina, on the Adriatic Riviera. Registrations were open from March 16 to March 31.[1]

This edition reached 60 registered attendees from Italy and Austria, 58 of which managed to be present at the con.[2] Three more people visited the con without participating and three more were also present during the Fursuit Parade.

The theme for the convention was "Fantasy", picked by users who first suggested some themes and then voted for them. The 2015 convention was subsequently titled "Zampacon: Fur Ro Dah!", in reference to the popular fantasy RPG videogame Skyrim.[3]

This year's edition provided full English translations of all the important info, rules, games, forms and forum threads, to allow non-Italian guests to register more easily and join every activity with no language barrier.[4] The schedule included a writing challange,a drawing challange, several panels, a movie & debate night, beach games, a videogame tournament, fursuit games with photoshooting, a LAN party and indoor games (Quiz, Guess the Character & Furry Meme). [5] Based on the idea on last year's initiative of some of the attendees, Zampacon organized Italy's first official fursuit street parade, with the permit from the city of Bellaria. [6] The parade was also featured on two local newspapers, being the first Italian newspaper article about furries. [7] Another new activity was the Zampacon Mystic Quest, a fantasy-themed treasure hunt mixed with quests, NPCs (interpreted by the Staff) and mini-games, taking place across the whole convention. Almost every attendee joined this game and they were split in 6 teams, markd by a sticker placed on their badge on a dedicated box. [8] The Zampacon Mystic Quest was particularly appreciated by the guests, who wrote really positive reviews about it. [9] Additionally, there was a public contest to select the articles that have been published on the conbook. [10]

As an April's fool joke, it was announced that a large group of German bronies would have attended the con, urging the staff to change the theme of the event and the poster with a "My Little Zampacon - Furriness is Magic" picutre, featuring the staff members' ponysonas (created for this occasion). [11]