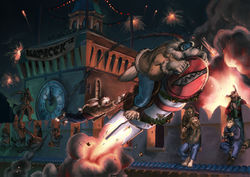 Zampacon '12 was the first Zampacon convention. It was held at the Due Torri youth hostel, inside a nearby villa reserved to the con, in the Emilian countryside of San Sisto near Bologna. The hostel is provided with a conference room and other facilities to allow for panels and games.[1]

The hostel's size imposed a limit to the maximum number of guests allowed, which has been set to 34 and the organizers agreed that such a limit would allow them to manage the event more easily. The hostel's villa was fully booked and payed for after the online registration ended, a full month before the con started. Eventually 4 of the 34 expected guest had to withdraw for personal reasons only a few days before the convention and only one guest managed to sign-up for the free slots bringing the official membership tally at 31, which included the three founders and only staff members, which also enjoyed the con as attendees in their spare time.[2]

Due to the tight time frame for the organization (started in October), the staff wasn't able to accept proposals for the panels and managed to prepare almost all of the activities by themselves. The convention's schedule called for games to be held in the morning in the hostel's lobby, and panels in the conference room in the evening, plus a couple of movie nights. For the new year's eve, following the suggestions expressed on the forum, the organizers set a mini-disco in the lobby, gaming tables in the upper floor, a firework show for the midnight and a toast with sparkling wine and Panettone.[3]