Zakai Jackson (born October, 1986) is a furry who lives in Springfield, Oregon, U.S.A.. He is engaged to Rocky Alstott. They have been together since January of 2008. Zakai has a jackal fursona, and spends his time playing video games (mostly Xbox 360), cleaning, and cooking.

Zakai discovered the furry fandom in late 1999, when in a Pokemon chat room on Yahoo!. He found these 'anthro' characters to be interesting and decided to look into them further. It wasn't long before he found a furry forum (Furotica Addicts Anonymous) and other small furry art-related websites using the name Raidy. He often chatted with the users of the forum, and was quick to make many friends.

Zakai joined Fur Affinity on October 30th, 2006 under the user name Raidy and used that profile for a little over a two years.

On January 1, 2008, Zakai met a doberman by the name of Danny Demont (many called him Dobe). Zakai found Danny using the site Pounced to search for local furries in his area. Originally he wasn't going to message Danny, since his interest were opposite of his own. Danny enjoyed rap, beer, and sports while Zakai was into all other music, didn't drink beer, and didn't enjoy watching sports. But he decided to send Danny a message anyway, that simply said "Happy New Year!" The two talked for quite a bit, engaging in phone calls a day later. On January 5th, when Zakai mentioned he had plans to go on a date, Danny admitted he was starting to like him by simply saying "I kinda dig ya myself". Later that day the two decided to begin dating.

In Febrary 2008, Zakai moved in with Danny and his current college room mate, then a few months later the two of them moved into their own apartment where Danny was able to get his then eight year old Yellow Labardor Retriever and Zakai received his Black Labrador Retriever puppy as a gift. Because the two shared nearly everything, they decided to make a joint FurAffinity account under the name Raidy and Dobe

Later, in 2011, Danny would change his fursona to a Pit Bull named Rocky. 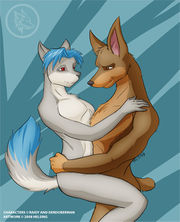 Zakai's fur color is usually white, though some artist give him a slightly gray color. He has a slightly larger and fluffier tail then other jackals, with it's tip colored the same shade of blue as his hair. His hair is currently styled in that of a fawks hawk. His fursona also has red eyes (a trait carried over from a previous fursona). Originally, Zakai went by "Raidy" but having three characters of the same name became confusing for most people, so he decided to rename his main fursona to Zakai with the help of his boyfriend, Rocky and Sister, Ikka.