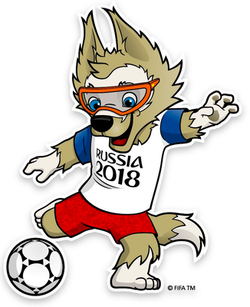 Zabivaka (Russian: Забива́ка) is the anthropomorphic wolf mascot for 2018 FIFA World Cup hosted by Russia.[1] Zabivaka was designed by Ekaterina Bocharova, a design student from Russia.[2]

Zabivaka is a wolf with brown and white fur. He is portrayed in official marketing as wearing orange sports glasses along with a pair of red shorts and a white T-shirt with blue sleeves bearing the words Russia 2018.

The color scheme of Zabivaka's uniform was chosen to match the colors used in the Russian flag. His name can be loosely translated as Striker or Goal Scorer (from the Russian: забива́ть -- "to strike").

Zabivaka was unveiled as a candidate for being the 2018 FIFA World Cup mascot on September 23, 2016, along with tiger and cat designs.[3]

The vote's results were announced October 22, 2016 on Channel One Russia after a month-long voting period. Zabivaka won with 53% of votes, followed by the tiger and cat characters, which achieved 27% and 20% respectively.[1][4]

Over a million votes were made over social media, on FIFA.com and during a live show broadcast on Russia's Channel One.[1]