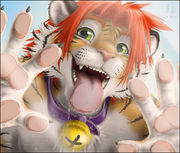 ZEN was born in South Africa, though he is of British descent. In 2004, he moved from South Africa to the United Kingdom to be with his mate Icelyon, whom he met online in 2003. It would be the first time they met in real life, however, while in the UK, they were not able to live together due to location.[2] They finally moved in together in 2006.[3]

Because of Zen's love for cheetahs, he had considered working at a cheetah conservation firm when he still lived in South Africa.[4]

He is one of the top 10 most popular users on Fur Affinity, according to the FA Rank.[7]

ZEN's fursona is a tiger called Joshua. Originally designed in 1997, he has undergone several different revisions as Zen's abilities in art have grown, though his overall look has remained largely the same.[8]

He was created by ZEN to represent his "perfect friend and mate", which is the reason why there are some discrepancies occasionally in the situations Joshua is drawn in that wouldn't pertain to how ZEN would act himself, such as submissiveness when ZEN himself is normally dominant. [9]

Joshua is a commonly patterned and striped tiger with bright red hair and green eyes. He also wears a purple collar with a large yellow bell hanging from it.

Having been a fan of fursuits for a while, it was only after Zen's first convention, RBW 2008, that he began to have a greater desire to have one of his own.[10] He commissioned one to be built by FirestormSix, a friend of his and fursuit maker.[8] The commission was started in 2009, and was completed in May 2010.[11]

Over the years, Zen's style has grown from rough lines and little to no backgrounds, to a far more realistic style and greatly detailed foregrounds and backgrounds. He is known for his photo-realistic fur] patterns and highly stylized highlights and shadows.

At one point in time, Zen started drawing a comic untitled Home Alone, though the idea was eventually scrapped, leaving fifteen pages in various states of finish, from rough sketches to a few fully colored pages.[12]