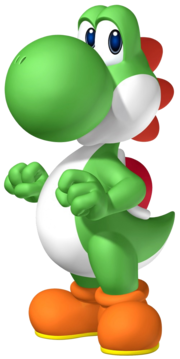 Yoshi (Japanese ヨッシ), once romanized as Yossy,[1][2][3] is a fictional anthropomorphic dinosaur created by graphic designer Shigefumi Hino that appears in video games published by Nintendo.[4] Yoshi belongs to the species of the same name, which is characterized by their variety of colors.[5]

Since his debut, Yoshi proved to be a hit with the fans due to his adorable nature and his usefulness as a power-up mount. Yoshi was originally a nonmorphic dinosaur, suited best for riding, but ever since Super Mario World 2: Yoshi's Island, the character was designed to be more anthropomorphic as his role evolved into a playable character of his own.