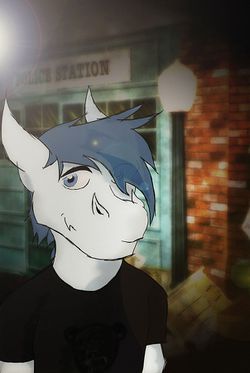 Yang Watanabe is a Mexican anthro artist, producer, actor, writer, illustrator, musician and producer. He is known for being the founder and owner of Freefall Records, an independent and multi genre record label closed in late 2012, re-opened in 2014, and Artegratis, a group focused in Creative-Commons artists promotion. His main alter-ego is a blue dragon.

Album front artwork of "Growin' Up"
The first Watanabe's musical act was named "M37H0D" (or M7D), an ambient and minimal music project. There's only one rare demo that was produced under the name M37H0D: "Growin' Up. One of the songs featured there, was dedicated to one of the Yang's friends TaniDaReal, named "Growin' Up/Ashati", dedicated to Tani's kitten, Ashati. Recently, Yang confirmed on his Twitter feed, that "Growin' Up/Ashati" will be featured on his second album, but under the name of "Ashati". This song would later be included in Xygen's debut release "Codex".

The album "Growin' Up" was fully produced and mixed over the DAW FL Studio.

After the ups and downs that "M7D" by the end of 2010, Yang decided to change things a little bit more, being the name one of these changes, as revealed by Yang Watanabe's via Twitter during May. The artwork for Xygen's debut album was revealed publicly on May 22 on his Twitter feed, being May 31 its official release date.

Infinity Xygen's follow-up to Codex, to be released on August 5. The official track list, album title and release day was announced via his Twitter feed and his Fur Affinity journal on July 16, 2010. This album couldn't see the light due to some issues with production and post production. Later that year, Yang announced on his Twitter feed that "Infinity" would never see the light since project files were deleted in a system crash.

On later 2010, Yang starts a musical solo project which consists in production for his own tracks and an exclusive recording label called Freefall Records (formerly known as CDragon Records). With this stage name, Yang has made a many covers for artists such as Owl City, Carpenters and Pendulum, remixes for artists such as Nine Inch Nails and Celldweller. In late-february, 2011, Yang announces that his first album as solo, Hospitality, had been finished and was ready to be released in April 24, 2011, releasing it later in October 13 of that year.

After Hospitality was released, Yang announced via Twitter feed that a new album was in the works.

In late 2011, Yang announced via his Twitter feed that he had quit music, but in late January he announced via his Twitter feed that a self-titled album is on the works. The album turned out to be a conceptual album titled Songs From The Inner Space, released in March 1, 2012, with Flight Of The Dragon, originally from Hospitality, as the only single out of it. 2014 marks Yang Watanabe's final LP release with Songs From The Inner Space Part Two.

Cybrpnkz! (pronounced Cyberpunks) is Yang Watanabe's side project composed by members Storm (A.K.A. Yang Watanabe) on bass guitar and vocals, Marco Lombardi (A.K.A. Marko) on guitar and background vocals and Hayley Strong (A.K.A. Hex) on drums, percussions and programming. It is a versatile project which genres span from electronic music for their early works to grunge and alternative rock.

On November 2, 2015, Yang Watanabe releases a teaser via Facebook, consisting in a recording of a Nuendo project file with a EDM song in the background, finishing with the "2016" legend and a red icon afterwards. On November 29 of the same year, Yang confirms with another teaser that the new release is for Cybrpnkz! comeback with the title track Dumb Machines released that day as part of the first "chapter" of the record. The second chapter was released a month later and the final album was released on April 2016.

In 2011, Yang decided to take a break from music and dedicate some time to a project he had since 2009: a webcomic. In mid-May, Yang published the first pages for "Unser Kampf" (Our Fight). He later decided to cancel the production due to lack of time and marketing failure.

Unser Kampf is the story about 5 classmates applying for test subjects for Dr. Zitko's new product: Unser Kampf: The Videogame, which takes virtual reality to another level. The goal was to reach Adolf Hitler and finally murder him, ending World War II.

In June 29, 2011, Yang published via Twitter that "Unser Kampf" would be adapted as a book, this by inviting some friends to make a foreword for the book; "I'm such a bludger when I need to write a foreword, you know?", he said.

In late-2011 Yang announced via Twitter that he started to suffer from MDD (Major depressive disorder) during the production of "Songs From The Inner Space". In 2013 he reported via Twitter and Facebook that he was out of danger.