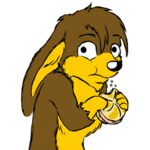 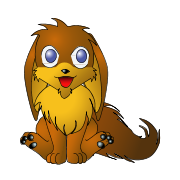 Yamavu (born January 28, 1982)[1] is an artist and fursuiter who lives in Vienna, Austria.[1] He was previously known as StalkerAT, but changed his nickname in Summer 2007 for private reasons.

Yamavu's fursona is a anthropomorphic, long-eared brownish-gold canid with a long fluffy tail. There also exists small, non-morphic version, used as a mascot.

Yamavu owns two fursuits, both of which he built himself. His main fursuit, depicting his fursona, debuted at Eurofurence 14.[2] His second fursuit character is Eddie McBadger,[3] a badger from Scotland. Eddie first appeared at Eurofurence 16.

The main media Yamavu uses in his artwork are colored pencils, Copics, watercolors, Photoshop and openCanvas.