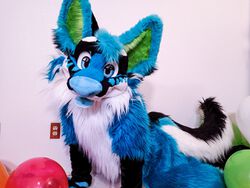 Xusho Wolf (pronounced Zuh-sho per YouTube introduction), is a fursuiter, artist, and YouTuber from Alaska. He is best known for being deaf and using the American Sign Language as his primary way of communicating with his audience.[1]

Xusho's fursona is a wolf with blue and green fur. His fursuit was made by More Fur Less. He also has a fursuit of a character named Gengi Cabbit, made by Thunderhowl Studios.[3]

Xusho is primarily known for making videos on YouTube. He does gaming videos as well as various random skits. Xusho communicates with his audience by the use of pantomiming, sign language, and subtitles on each of his videos.

Xusho has a big liking for NASA, rocket ships, and outer space. He is often visible wearing a blue jumpsuit with space-oriented patches on it. He also owns a Lego model of the NASA Saturn V rocket that he built himself.

He is one of several furries who have merchandise of their fursona available for purchase.