xkcd, also known as XKCD, is a webcomic created by Randall Munroe, a former contractor for NASA. He describes his comic as:

A widely read webcomic, xkcd has gathered a large following, catching even the eye of the mainstream media.[1] 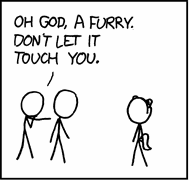 #471 discusses the ridicule of furries on the Internet. The main speaker asks the fur to help her fly a kite; while describing the fur's "fetish" as "weird as hell", she points out the double standard of people treating furries as the "designated Internet punching bag", when they "are otherwise down with weird fetishes".

#541 states that the character shown is banned from "Every American Furry Convention".

#629 talks about 'skins', a sub-group of furries that like to roleplay furries who imagine being humans and dress up as them

#919 has a character attempting to cram as many of "the most hated English words"[2] as possible into one sentence, and comes up with: "By my guesstimate, my frenemy yiffed so hard her moist taint made her panties preggers!"