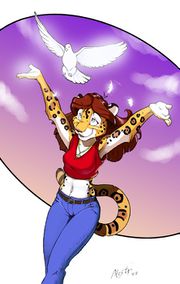 XianJaguar, as drawn by Miles DF.

A well known Christian fur, XJ has been spotted at almost every Further Confusion.[when?]

XianJaguar received the Furry Emergency Fund's Annual Talent Support Award in 2003 and 2004. She is also the recipient of an Ursa Major Award for "Best Anthropomorphic Published Illustration" in 2001.

She was chosen to be Artist Guest of Honor for Rocket City FurMeet in 2010.

Who Are You People? contribution[edit]

In a long interview in the "Misfit Furries" chapter of the 2006 nonfiction book, Who Are You People?, she left a positive impression on the author after discussing her attitudes toward art, the furry fandom, and Christianity.

The chapter itself is named after her drawing, "Misfit Dragon".