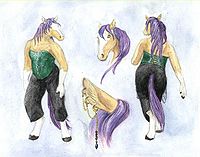 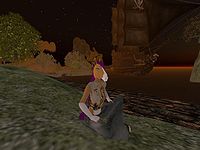 Xanthe sitting outside RCFM in SecondLife. The ship is for RCFM's theme next year, Deep Six. 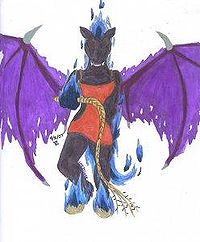 The Nightmare, an alter ego of Xanthe's

Xanthe (born May 1, 1985), is a Palomino Quarter Horse, Percheron mix who lives in [[wikipedia.S.A, where she is employed by the state. Xanthe has been a furry since around 2001. Her first furry convention was RCFM 2007.

Xanthe is a member of Louisianafurs. her first meet was Yuro Zutto's birthday party in March 2007. She is a colorist for Yoru's work.

Xanthe is on SecondLife under the user name Xanthe Blackadder.

The alter ego of Xanthe has no name. She is as evil as she is black. Her pelt the deepest of black, so black there is a slightly purple tint to it. Her mane and tail are made of blue flames. A bit of flame comes from her hooves and hands. Her hooves are golden and those eyes are a hellish red. Even though the NightMare is an equine she has fangs and bat like wings that are somewhat tattered, but can still hold her in the air. When wishing to move she can either fly using her wings or drift. The NightMare is able to allow her body to shift into a mist that floats about, barely noticed at all.

A bit evil and mostly insane, the NightMare is the darker side of Xanthe. The NightMare comes out when she is terribly upset, depressed, pissed off, or sometimes the NightMare just comes out.