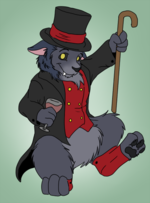 Wuffles the Worgen is a furry writer who lives in the United States. He enjoys video gaming, writing, work, and finding the best things for his home.

Wuffles' fursona is a dapper Worgen (a species from the online MMORPG, World of Warcraft). His previous fursonas were a black wolf, a white wolf, a human, a husky, and a folf.

At the time he was looking for a new fursona to replace his husky character, Wuffles was obsessed with alliteration, and in the end settled on "Wuffles the Worgen", though he commonly refers to himself as "Wuffles the Wonderful Worgen". Although he no longer plays World of Warcraft, he still enjoys his Worgen fursona.

Wuffles is always depicted wearing some sort of fancy clothing, along with a top hat. Sometimes he can be seen carrying a cane.