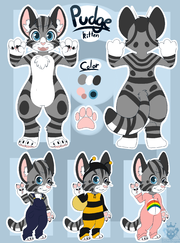 Woofstep, previously known as Millerthehyena (born 1998), is a female furry artist who lives in Florida, USA. Woofstep prefers to be called Cynthia by their closest friends, but nicknames are acceptable to them.

Woofstep's interests online or in real life are largely connected to the furry fandom, having been interested in talking animals since first watching cartoons like Tom and Jerry and Duck Tales, way before she even knew what a furry was.

Woofstep mostly draws anthropomorphic and feral creatures, but they also draw humans from time to time.

Woofstep has multiple side characters, but the most known ones are Alec the western dragon, LegMonkey the monkey, Thomas the Cockatiel/Turtle, and Serena the Sheep (retired character).