Wolftale and her boyfriend Joon's fursonas, drawn by Alector Fencer 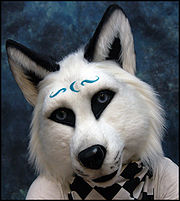 Wolftale Kiwaku (born July 4, 1986) is a Norwegian furry artist and fursuiter. She discovered the fandom around 2004, thanks to her boyfriend, Joon, and she has stayed active in the Norwegian fandom ever since.

Wolftale's fursona is a arctic folf, a hybrid of arctic fox and wolf. She is looks more like a fox than a wolf, and has black markings on her ears, paws, and tail. What makes Wolftale unique is a crescent moon mark on her forehead.

Wolftale's first furry convention was CabinCon (July 2008, in Norway), and she has also attended: