Wolfhome is a two-dimensional graphical chatting site where members can use and create their own custom avatars to represent themselves. With a vast amount of natural environments to explore and canine-themed avatars to use, Wolfhome attracts many types of people. Along with its chatting component, Wolfhome accommodates roleplaying in distinct areas, and has a forum where users can discuss and share ideas, interests, as well as art! Wolfhome is the perfect place to immerse yourself in a new, mysterious and enchanting environment. Join our community, release your creative side and find a place to call home.

Wolfhome's chatrooms consist of a room background with users avatars placed on top. Users can move their avatars around and change poses. The chatlog resides at the bottom of the page. Before participating in the chat, users should familiarize themselves with the Rules.

Public rooms are PG-13. Roleplay is only allowed in roleplay designated areas or private rooms. The Mysts provides the entire list of public and private rooms.

Many of the subscription levels on Wolfhome allow the creation of "rooms" (also known as "locations"). Your rooms on Wolfhome are your own personal space. They can be pretty much anything as long as they don't violate the Terms of Service. How to upload a room. Private Room FAQ. The Wolfhome Administration is not responsible for the moderation of privately owned rooms. The owner of the private room is responsible and in charge of what happens in the said room. This means that when you enter another user’s room, you are subject to their rules. You should enter the private rooms of others at your own risk.

You can use an avatar to interact with others by changing "poses" to express your mood or actions. Users with the free subscriptions may use the free poses in The Bodyshop. Users with paid subscriptions are allowed to upload their own custom poses. How to upload a pose. Before submitting a pose, users should familiarize themselves with the Art FAQ.

The Wolfhome forums have been updated on August 27, 2017. The new version can also be viewed on mobile devices. Included are the Official Wolfhome Board, Wolfhome Community Board, Wolfhome Art Section, Wolfhome Market Place, and Character Lore.

Wolfhome is free to use. However, to access some of the website's premium features, you will need to purchase Wolfhome Deltas. There are six different types of subscription: Free, Basic, Standard, Preferred, Elite, Ultimate. Users with free accounts can use the site's pose presets for their avatars. Subscriptions allow users to submit poses and rooms for approval to use in chat and more.

Deltas (Δ) are Wolfhome's very own currency. $1 USD = Δ1 delta. They can be purchased with Paypal. You can use them for purchasing a Wolfhome subscription, buying art from Wolfhome artists, or other services found on Wolfhome. Price chart. Wolfhome Deltas FAQ Page. 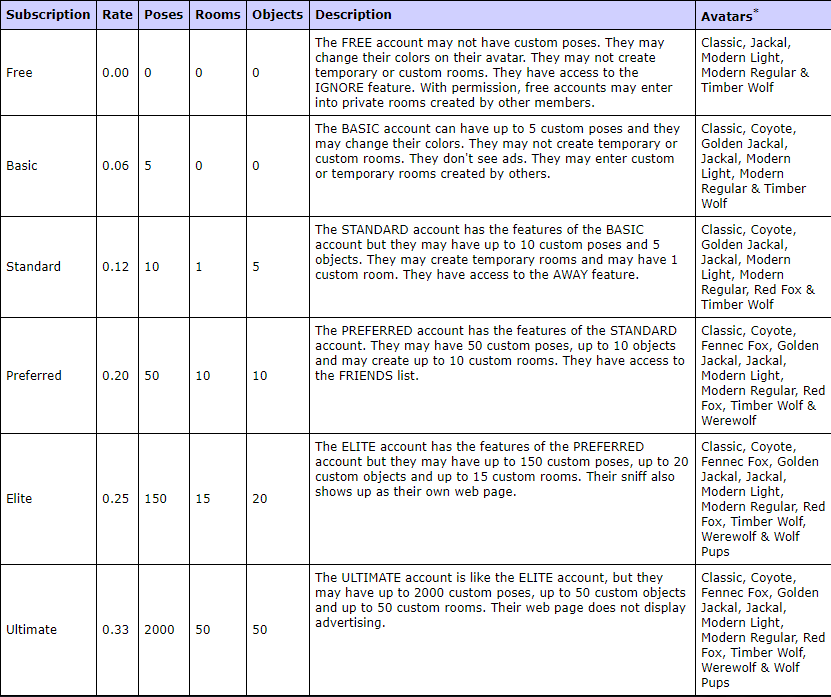 The chat was released on Halloween of 1999. Wolfhome was originally planned and put into creation by Gre7g and Goldenwolf, the programming done by Underdog, the artwork done by Goldenwolf, and all three collaborating on the overall theme, look, and organization of the "world". Gre7g was buddies with Underdog (they played D&D together), Underdog showed Gre7g and other gamers the first version of what at the time he called A.B.C (avatar-based chat). About 6 months after that Wolfhome was released.

For a time Wolfhome was quite popular, with the expressive wolf poses and scenery and fun interactions. Wolfhome's ability to attract artists of fame, such as Goldenwolf, Kyoht, Jachthond, Yelth, and others, has been a huge attraction within the were community, and indeed it has helped launch more than one now-famous artist. As its name suggests, the site was based on the theme of werewolves, wolves, and wolf therians, with a pack-based ranking system (Alpha, Beta, etc.) though the site eventually also included other wild canines and even large wild felines (though felines are now no longer allowed). As a free site, the popularity grew so much that Gre7g was forced to turn parts of Wolfhome into a fee-based chat in order to support its own costs. Throughout its existence, part of the Wolfhome site was always free.

The partnership between Gre7g and Underdog eventually led to the creation of a business venture, "A Thousand Words Network of Kansas, LLC" and that company launched the site www.a1000words.net (now defunct). This website gave others the ability to create and manage similar graphical chat servers, to control their own membership and to create their own unique characters and environments.

Gre7g eventually moved out of the Kansas City area to Utah, and in the fall of 2004, the a1000words.net server suffered a serious server crash while Gre7g was away on vacation. This server crash brought down wolfhome.com and of the other affiliated chat services. It turned out that almost all of the recent database information was irretrievable. Because of many other factors, including some disagreements among the members of the admin team, and coupled with both Underdog's and Gre7g's lack of continued interest in the site, Wolfhome was allowed to remain offline and users were refunded their remaining balances.

A user named Kerfuffle appeared several months later in the spring of 2005, approached the administrators of the then-dead site, and proved himself to be a very capable programmer who brought with him the hope of resurrecting Wolfhome. Indeed he did, and so recreated the chat, albeit in the form of a downloadable client as opposed to the web-interface it had been in the past. Wolfhome's popularity swiftly returned.

Unfortunately, Wolfhome once again fell into political disarray. Bickering started between members of the userbase and the Wolfhome administrators. Different factions formed within the userbase and different theories were being followed through on how the chat should be run and moderated. It has been said that many of the users did little but constantly complain and fight over which of the admins listened and which did not. The feuding spilled over into the public forums. Perhaps because of his disgust with the never-ending conflict, Kerfuffle decided to take leave of Wolfhome in the fall of 2005, saying he would "keep an eye" on his project. He left a warning that if things didn't start to work, he would disconnect Wolfhome for good.

In February 2006, one of the Wolfhome admins, Foxgrin, was demoted by majority vote of the admin team; there were never any clearly announced allegations against Foxgrin it seemed to be a personality conflict as well as conflicting ideologies on how the chat should be run (with Foxgrin on the side of "the users" and the rest of the administration on its own side.) Immediately after the demotion vote results were posted in the forums Kerfuffle returned and closed the site down instantaneously. Kerfuffle refuted rumors that Foxgrin's demotion was the sole cause of his taking Wolfhome offline. In a public post, he wrote that he disagreed with the demotion and felt that it had been mishandled and that it was "the last straw" in a string of greivances and conflicts. Wolfhome remained down.

After taking the site offline, Kerfuffle disappeared from Wolfhome and seemingly the internet entirely, leaving behind only a faint glimmer of hope: that if the remaining patrons of the site could work together to form a plan that would ensure peace on Wolfhome and be agreeable to the majority of people, he would turn it back on. In the months since the February shutdown, a group of users attempted to do this to entice Kerfuffle to return. This group was headed up by FoxGrin and included many former users as well.

In September 2006, Underdog posted several messages on the Wolfhome forums, volunteering to resurrect the original Wolfhome service, but with software updated to run on modern browsers.

There was a separate effort to start a Wolfhome chat site. A small group, headed by a benevolent dictator for life Hadey and lead programmers LinuxDewd and Mif, former admins of the old Wolfhome, had thrown in together and attempted to create "Wolfhome Classic". Not billed as competition to Kerfuffle's Wolfhome, but rather a return to an older method of running the site and a "return to roots". This project is currently shut down, with no plans to continue, due to several emails and conversations between the project works at Wolfhome Classic and Underdog, who threatened legal action. This was due to Kerfuffle allegedly not having permission to allow other projects to use Wolfhome art and names. It was decided instead of a drawn-out legal affair it would be simpler to merely halt work, disappointed many users and staff who had put in a large amount of work.

On Halloween 2006, Underdog successfully reopened the former web page version of Wolfhome and the chat is functional once again. There are missing features and bugs present in the system, however, these issues are being ironed out as they present themselves to Underdog and the administration team.

As of June 2007, the payment system has been implemented onto Wolfhome once again and users may pay for additional chat avatars and private room uploads, however, individuals may still use the chat site for free. Free accounts see ads in a side panel, are not allowed to enter private rooms without permission from the room owner and may not enter the chat if too many free members are already online.

In late 2008 and early 2009, Underdog introduced the concept of alternate species in private rooms including humans and humanoids. While these species are only allowed in private rooms with the room owner's permission, this has caused some controversy. Many feel that this approach breaths new life into the chat and that it is necessary to have an active and changing site, but others feel that these changes break away from established "policy" regarding poses. While other canid and animal species, real and mythical, had been allowed in the past, the possible introduction of humanoids caused some concern and resulted in at least one admin resigning. Other changes for Wolfhome are in the works, and while not all of these have been publically announced, it is clear that Underdog wants to continue updating and hopefully improving the Wolfhome website in spite of the wishes of many members that the site remain as it was when it was first introduced back in 1999. It continues to be up and running with sister chatlands branching out of it.

In December 2021, due to rising tensions between the userbase and the site owner underdog, the website and forum was taken offline until further notice. This was the direct result of a number of forum topics surfacing demanding that long-term changes be made to improve the relationship between administration and subordinate users and the discourse that took place within those topics that ultimately lead to a site alpha’s demotion over a Code of Conduct break, and multiple other long-time administrators resigning from their positions.

Shortly after this demotion, tensions rose to new heights, and the users, administrators and even Underdog [UD] could not contain themselves. Screenshots of administrative chat were leaked, providing evidence of off-color remarks towards the website members, resulting in a complete breakdown of order. The screenshots showed the hypocrisy of the team in place and UD as well. Many remaining users have been cited as saying, "There is no way to come back from this. No apology would undo the harm Underdog has done, and all of the admins serving him."

Some issues that caused this turmoil will be listed below.