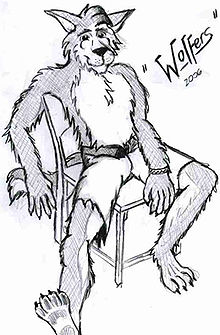 Wolfers is a male anthropomorphic full-blooded South African wolf. He is roughly 6ft tall and well defined but not chunky. Being a pure wolf, he is rather plain, with no special features or abilities with the exception that his fur color is mostly grayish blue, and has an iridescent gleam. It changes color slightly when viewed from different angles, ranging from darker hues of blue-gray, to a lighter bluish color. The blue fur is accented with softer light gray fur over his muzzle, chest and belly. (His chest being particularly furry) This lighter variation extends further down between his inner thighs and under his tail. He has big gleaming hazel eyes that seem to look right into a person’s soul, but in a pleasant way.

Wolfers has an artistic nick in his left paw, and likes to exploit it. He isn’t very efficient with digital media and prefers to stick with pencils and paper. He loves drawing anthropomorphic characters and their feral counterparts, and also the occasional landscape drawing. Presently he is working on a comic strip idea. He also enjoys writing furry stories, especially of the romantic sort.

Wolfers enjoys hanging out with friends and making them laugh. However, it’s not always clear if said friends are laughing with him or at him. He likes being random and doing unexpected things.

He is single and prefers the more masculine members of the fandom.

At the moment he is studying to understand the complicated workings of that dreadful machine more commonly referred to as a personal computer.