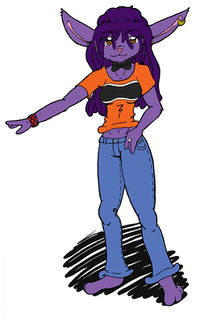 Hoshiko Usagi a.k.a The Witchiebunny

Hoshiko Usagi is an artist within the Furry fandom. She is also known as The Witchiebunny.

Usagi's fursona is a purple rabbit with darker purple headfur. While details may vary as to her clothing, she is always seen wearing a bowtie on. (Likewise, Usagi's signature shows a bunny head with a bowtie underneath.)

Usagi in the real world[edit]

Usagi attends conventions as she is able, and can normally be seen at Anthrocon. She lives in Norwich, CT, U.S.A.

Hoshiko Usagi writes and draws a webcomic, Hidden Disguises, which has been on the web and updated more or less regularly since September of 2004.

She maintains an up to date gallery at Weasyl and somewhat less so at FurAffinity with most of her recent art. In addition, she has three defunct galleries, at Elfwood, VCL and at deviantArt(the latter of which is empty).