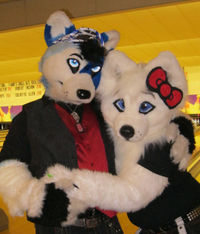 As a full time local Montgomery College student, Rain wants to advance her education by obtaining a degree in Mental Health, and a minor in art to ultimately do Art therapy with mentally disabled children. She is mated with Leo.

Rain has been in the furry fandom officially since 2007, but has always had a passion for anthropomorphic animals since an early age. She founded, but no longer runs, "MarylandFurs" [1] on Fur Affinity.

Wintersnowolf's primary fursona, Lady Rain, is a female Punk folf (a Wolf/fox hybrid). She is hyper, fun loving and easy to talk to.