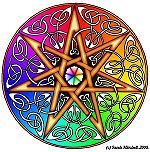 Otherkin are those who believe that their physical forms do not define or fully encompass their mental states, personality, psychology, or spiritual nature. First appearing on the Internet in the mid-1990s, the term was intended to imply some form of kinship with an 'other' element outside of a person's biological nature, physical mind and experiences, and human life.

Otherkin generally feel they have an affinity or connection with another animal or being. The term is believed to have been coined in the late 1980's by those with a relation to the fae folk and/or elves of traditional mythological culture and folklore, but associations with other creatures became common, including unicorns, gryphons, dragons, angelics, and demons. (more...)