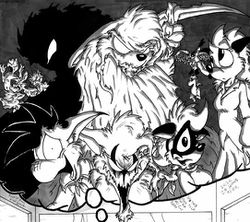 Jack is a furry webcomic by David Hopkins. It is set in a world populated by anthropomorphic animals and focuses on judgment and afterlife.

The titular Jack is a wizened green rabbit who lives in Hell. He is the embodiment of the deadly sin wrath, whose punishment is being the Grim Reaper. In life, the unfairness of some deaths, particularly towards the ones he loved, made him angry. In his position as Grim Reaper, he now has to witness more death, the cause of his wrath. Jack attempts to remember the sins he did in life in order to be forgiven for them. This is hard for him as his other punishment is having no memory of his life on Earth.

Jack has had a mixed reception. Positive reviews claim Jack is enjoyable because the story arcs contain meaning and comments on morality. Critics respond that the comic is "glitz over substance", and have complained about the use of graphic violence.

Jack was joint winner of "Best Dramatic Comic" (alongside Demonology 101) at the Web Cartoonist's Choice Awards in 2004. (more)