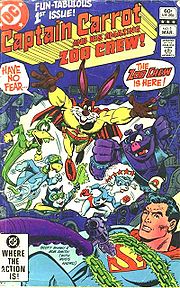 Captain Carrot and His Amazing Zoo Crew is a DC Comics comic book property about a team of funny animal superheroes called the Zoo Crew. It was published from 1982 to 1983, and was created by Roy Thomas and Scott Shaw!.

Although the series, which was the last original funny animal property created by DC Comics, proved short-lived, lasting only 20 issues, it is still fondly remembered in furry fandom, and the characters still appear occasionally in cameos in the DC Universe.