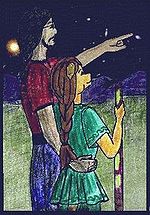 A Fox in the Works is a long-running online furry story written by Foxeris that first appeared online on December 25th, 1995. The series is a sci-fi and fantasy mixture following the life and adventures of Fox Cutter, his wife Oriana, and their friends through a sprawling multi-verse. The stories range from high fantasy, political intrigue, science fiction, mystery, romance and drama, all to varying degrees.

The story has progressed through five years of storytime so far, with each year comparable to a season of a TV series. It is primary made up of short stories, with the occasional novella and one or two novels every year. Each year is built around a large story arc started in the previous year, which may continue onto the next. Many subplots wind through the series. While it is best to read the series from the beginning, the story "Run Around" is a good mid-series starting point. (more...)