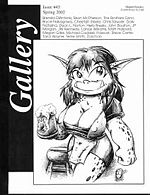 Gallery was a publication for cartoonists and illustrators, a significant proportion of which had contents that were anthropomorphic or funny animal in nature, which ran quarterly from the fall of 1989 to the winter of 2004 (issues #0 through #50). Gallery was 8.5x11" and printed in black and white; most issues were between 200 and 300 pages with 25-32 artists contributing. It was described by its creator Richard Chandler as "a cross between an APA and a fanzine."

When Richard Chandler was first getting started in furry fandom, he became aware of two APAs, Rowrbrazzle and its predecessor, Vootie, but was not able to locate any copies to view because they were only available to members; Vootie had ceased publication before Rowrbrazzle began, and the waiting list to join the latter was estimated at three years. While Richard hadn't seen either APA, he had seen copies of some of the artwork inside them and was very impressed. Lacking drawing skills and not wanting to wait to join, he decided to start his own fanzine in the fall of 1989, making it open to subscribers, and the first APA that paid royalties.

Gallery had three classes of members - Member Artists, Contributors, and Subscribers. Members were those artists who had been Contributors for at least one of the past three issues. Unlike Subscribers, they received the publication at cost, and without paying royalties. Anyone who was able to demonstrate the talent to express themselves artistically was welcome to try out for admission as a Member Artist, whether professional or amateur. Although many of the artists were furry fans, there was never a requirement for furry art, nor a theme.

Like in an APA, Member Artists were invited based upon the art sent in for review. Richard Chandler stated he looked for things like anatomy, varying line weight, balance, shadows, textures, backgrounds. He also preferred character interaction and pictures that seemed to tell a story, especially comic strips, and considered a good sense of humor to be a plus. Contributions of which 50% had been previously published, or simultaneously submitted to other publications were disallowed, except for limited, members-only publications such as Rowrbrazzle.

Gallery's rules became a model for other APA/'zines like Huzzah and Yarf!, and helped keep the friendly atmosphere of "give and take" from an APA in a publicly accessible fanzine. When he discontinued publication, Richard stated he was having trouble finding fresh talent and people willing to buy new issues, due in part to easy self-publication and the availability of free artwork on the Internet, and his own inability to attend conventions to sell them. (more...)