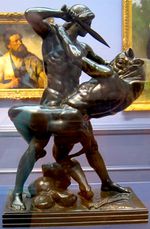 Minotaurs are quite uncommon in the furry fandom, but they feature in fantasy role-playing games such as Dungeons & Dragons, Magic: the Gathering, Shadowbane and in World of Warcraft as the Tauren. (more...)