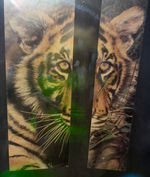 Therianthropy is a generic term for the transformation of a human into another animal form, either as a part of mythology or as a spiritual concept. It is derived from the Greek therion, meaning "wild animal", and anthrōpos, meaning "man".

Therians believe that they have an intrinsic, personal, and integral connection to an animal (or animals). Most believe that mental and emotional shifts can occur as a result; a controversial minority extend this to the physical world. Some believe they have the spirit or soul, in whole or in part, of a non-human animal; most identify as feline or canine, often big cats and wolves. Their beliefs often overlap with aspects of shamanism or totemism.

Some furries view therianthropy as "taking it too far," while some therians view furries as frivolous and ignorant of the "true nature" of animals. However, relations are usually friendly, and therians can often be found at furry conventions and other social events. (more...)