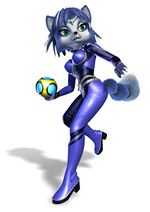 Krystal is a fictional fox character created by Nintendo and Rare for the Nintendo 64 game Dinosaur Planet. Her role in that game was intended to be a playable primary character, but in the revolutionary introduction of the Nintendo GameCube, her role changed. The game Dinosaur Planet was scrapped and its elements were modified and altered into Star Fox Adventures. Her playable status was made short and she became the "damsel in distress" in the game who was trapped because she could channel spirits. (more...)